The Last Airbender is a live-action film adaptation based on the first season of the animated television series Avatar: The Last Airbender. The film stars Noah Ringer as Aang, a reluctant hero who prefers adventure over his job as the Avatar.  The first of a planned trilogy, The Last Airbender was produced by Paramount Pictures and Nickelodeon Movies.  It was adapted into a film by M. Night Shyamalan, who both directed and produced it. Other producers include Frank Marshall, Kathleen Kennedy, Sam Mercer and Scott Aversano.  The series from which it was adapted was influenced by Asian art, mythology and various martial arts fighting styles and was created by Michael Dante DiMartino and Bryan Konietzko.

Where to begin with this … movie?  The very first line of the movie, delivered by an … “actress”, who looked 7 but was supposed to be 14 years old, had me wanting to walk out of the theater right then and there and demand my money back.  The performances of everyone in the movie was earth shatteringly bad.  I have seen elementary school plays that delivered more conviction and credibility than anyone in this entire cast. 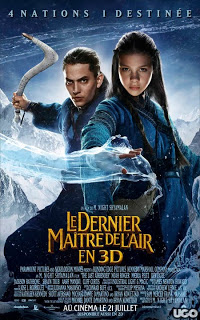 The casting was jarring.  You have a completely and wholly Asian story about a mythical Asian world where magic is divided into the four basic elements- water, fire, air, earth – yet everyone in the movie was white, plus 1 Black guy.  Don’t get me wrong, I’m happy that a Black guy is getting work in Hollywood, but a Black man cast as an Asian monk?  I think the affirmative action card was used in the exact wrong place here.  Also jarring was the fact that the emperor looked like his general, and I mean an exact duplicate, down to the haircut.  It was unnerving to hear white people talking about tapping into the spiritual nature of things.  To my mind, only indigenous people should ever be portrayed as having spiritual awareness.  Historically speaking, Europeans played upon this very nature of indigenous people to believe in the spiritual realms to overtake peaceful people and subjugate and rule over them.  You cannot then make a movie, wholly based on spiritual realms, elements and celestial guardians and cast a 99% white cast in the roles.  What hubris is this?

The costuming was appalling.  Where the cartoon had very vibrant clothing for everyone, and everyone is very identfiable by their clothing, i.e. earth nation wears bright greens and browns and fire nation wears bright oranges, red and black, in the movie everyone was sentenced to wear drab upon drab colors.  The worst costume of them all was Princess Yue, who is the pricess of the northern water tribe.  All of the water tribe is sentenced to wear drab clothing, but the princess has the shame to wear a full, long head of gray hair.  While my friend watching with me said it was white, I pointed out white colored materials in the shot and then pointed back to her very gray hair.  Apparently M. Night Shyamalan did not see Lord of the Rings, and see what white hair is supposed to look like onscreen.  I found Gandalf’s white hair, quite appealing in the movie, once he returned with it.  This chick, the princess, however, had gray hair.  And, it looked a mess.

What can I say about the script?  It was terrible.  The entire movie was nearly narrated.  Even worse, at one point, when avatar and friends arrive at the northern water tribe, the narration drones on and actually says “and my brother and the princess Yue really liked each other.”  I almost fell out of my chair.  I cant’ believe we had to be told this, instead of …. people writing scenes in a script?  Nah, too complicated.  I felt like this was a book on tape.

What can I say about the on-screen chemistry of the actors?  It was non-existent.  At one point in the movie a dragon spirit says to our hero the avatar, Aang, “you’re not allowing yourself to grieve for all of the air benders being slaughtered by the fire nation, you’re just showing anger all the time.”  I was like, when did he show anger, did I blink and miss it?

The final straw was one of the last scenes. The great general, who had formulated this entire invasion into the northern water tribe is walking by himself and four nameless water benders come up and put him in a bubble of water.  What was terrible about this scene was first: he’s a general, in a war zone walking around by himself, JUST, for this one scene, up until this scene he had been surrounded by guards.  Secondly, that these four water benders are all nameless anonymous characters.  Thirdly, you don’t even realize that he’s dead until two scenes later when the report, I mean narrator, tells you he was killed.  Fourthly, this general is one of the most powerful fire benders in all of the nation of fire benders, but he is taken out by anonymous characters?  Seriously?  I can only imagine M. Night Shyamalan was like, “oh we need the general to be dead.”

Avatar: The Last Airbender has a huge following.  It is no wonder they did not clear production and marketing costs with this movie.  But, the movie was so terrible that it doesn’t surprise me they didn’t make money on it.

Apparently M. Night Shyamalan has the go-ahead to complete the trilogy.  Someone please help us.